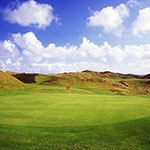 The Carne links at Belmullet is in the late Eddie Hackett’s swan song. The course is set in splendid isolation along the Atlantic coast of County Mayo. The 6,700 yards Par 72 links is NOT an out and back affair. The holes snake up and down the dunes in all directions. A trip to Irelands beautiful west coast would not be complete without a game at Carne. 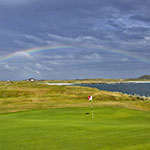 This awesomely picturesque 72 Par course with breathtaking views of the Atlantic Ocean was designed by Eddie Hackett and measures over 7,000 yards. Wind and rainbows are the specialty of the house at this 27 hole course. This traditional links course can expect any type of weather during the round. 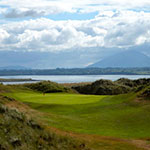 The most beautiful beach in Ireland, the Moy Estuary and the Atlantic Ocean, all encompassed by the backdrop of the Nephin and Ox Mountains are what welcome you at this magnificent links course. An idyllic haven for a truly wonderful test of golf. 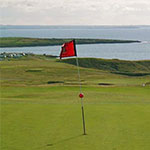 Rosses Point has been the home to the West Of Ireland Championships since 1923 and has such notable former champions as Des Smyth and Padraig Harrington. Established in 1894, the Par 71 6,609 yard links has tested the skills of such golfing legends as Walter Hagen, Bobby Locke, Henry Cotton, Tom Watson, Nick Faldo and Darren Clarke who all spoke very highly of this excellent track.

This championship links course is set in North west Donegal. The front nine holes are played along a majestic stretch of beach & have many large sand hills, while the back nine loops around a large bluff with a lot of inland characteristics. 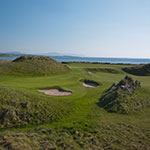 Darren Clarke described Donegal Murvagh as “one of my favorite courses in the world”. High endorsement! (the text doesn’t finish) In the past the course has hosted the Irish Ladies Close Championship (1979), and more recently in 2003 the Men’s Irish Close Championship. 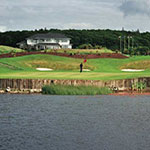 Located out on the picturesque Renville Peninsula, the golf course is literally peppered with historic remains, including the mystical Rathnapours ring fort, an ancient fairy fort and ruins dating back to the 16th century. Measuring over 7,000 yards from the championship stakes, it is difficult to single out any one hole for special mention. However, Gary Player once described the 178 yard 13th hole as one of the finest par 3’s he has ever seen or played. 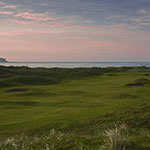 Ballyliffin is Ireland’s most northerly golf course, located off Tulagh Point on the Atlantic edge of the Inishowen Penisula. The Old is a classic links with fairways that roll and pitch through wild dunes. This is golf links at its most traditional. Ballyliffin is often described as “the Ballybunion of the North” and this newer Glashedy Links provides a roller-coaster tour of this remarkable lunar-like landscape. A Par 72, it measures over 7200 yards. 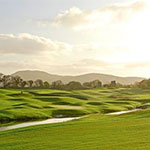 Castle Dargan is a 200-acre manor on the outskirts of Sligo with a rich and romantic heritage. The golf course on the estate has been designed by European Ryder Cup hero Darren Clarke. His eighteen holes have embraced the wonderful rolling lands of the estate, its old stone walls and the romantic shores of Lough Dargan. “Castle Dargan reflects everything I love about the game. It’s a club I am proud to be part of” Darren Clarke.