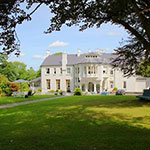 Beech Hill Country House Hotel is a privately owned country house hotel 2 miles from Derry. It retains the elegance of country living and has been restored to create a hotel of charm, character and style. It’s ambience is complimented by the surrounding grounds, planted with a myriad of trees, including beech. The restaurant offers superb cuisine using local produce and homemade specialties. 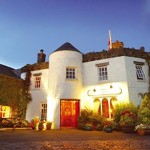 Bushmills Inn is situated in the village that is home to the world’s oldest distillery between the Giant’s Causeway and Royal Portrush Golf Club. This multi-award winniing hotel, on the banks of the River Bush, with turf fires, old lamps, nooks, crannies and even a secret room , presents an extensive range of intruiging bedrooms, an atmospheric restaurant and a victorian bar, still lit by gaslight. 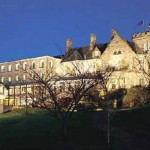 The Slieve Donard, nestling at the foot of the Morune Mountains, rises magestically above the sand dunes, rivalled only by it’s namesake, Northen Ireland’s highest mountain, which creates a dramatic backdrop for a long sweep of golden sand. Lovingly maintained architecture at it’s most impressive, this very special hotel offers delights both inside and out. The atmospheric Percy French Inn offers relaxed dining, while more formal dining is provided in the magnificent Oak restaurant. 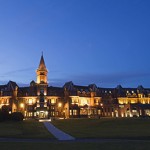 Stands on the wooded slopes of the Hollywood Hills, overlooking Belfast Lough and the County Antrim coastline. Originally built as the official palace for the bishops of Down, The Culloden lies in 12 acres of beautiful secluded gardens and woodland. Palatial surroundings, fine antiques and the highest levels of personal service combine to give this luxurious hotel a unique air of elegance.